How to Heat Treat and Temper Toolsteel

The process of heat treating steels to alter its structure has been used in engineering almost from the outset of steel manufacturing. The definition 'heat treatment' covers many aspects and processes from simple annealing to full molecular organisation.

This paper is designed to show only the very basics of the hardening process and tempering of gauge plate and silver steels on a small scale, the principals are similar and may be applied to other grades of carbon steel as well.

Hardening O1 to vastly improve its wear resistance and longevity is a basic process of pre-heating, heating, rapid quenching then tempering back - and can be effectively achieved in most workshops fairly easily and safely. Many of us are likely to start the hardening process on a finished or near complete component - so several factors must be seriously considered before we begin.

• Heat source capable of reaching temperatures of about 900°C or 1600°F, typically a oxy-acetylene kit or a muffle furnace - for very small items a propane plumbers torch may be sufficient.

• Health and safety gear which should include gloves, boots, goggles/eye protection, tongs and a leather apron.

Problems that may occur:

The most common problem that the engineer should be aware of is that distortion and growth of the component is fairly likely to occur during the process - therefore some tolerance should be given to running surfaces to allow for post grinding or machining. Distortion can be reduced by several methods, but even companies that specialise in mass production heat treatment are unlikely to be able to produce a 100% success rate of distortion free treatment - with the exception of nitride hardening.

Other more serious problems to occur could be cracking (see quenching solution below) or heat spots (or small 'melts') caused by too much heat being applied.

Generally one should consider problem areas such as:

• Thin webbing - possibility of cracking because of the varying mass of material from the parent to the web and the rapidness of the cooling that is likely to occur in the area.

• Thin wall section such as tubing - probability of material growth and bending - sometimes cracking if the wall section varies considerably.

One of the most important areas of successful heat treatment is the quenching liquid used to rapidly cool the hot material. The liquid should be varied depending on many aspects of the part being treated and some degree of 'common sense' is required to avoid a disappointing outcome. It should be remembered that quenching a hot material 'shocks' the structure - which is of course the whole point of the process, to 'lock' the grain structure instantly.

As a rule, most of us will heat treat (harden) a component that is very near to finished machined - which is one of the reasons why the quenching media selection is important as severe distortion or cracking could be disastrous.

Three quenching solutions that the engineer should consider:

Water - The most commonly used and oldest method that will achieve good overall results on components that are bulky and unlikely to crack.

Brine - To be used when maximum cooling is desirable to achieve maximum hardness. Produce by warming water then mix as much salt as it is possible to dissolve into the solution - this gives the water a higher boiling point and makes it 'wetter' to reduce the formation of air pockets around the hot steel. Brine will produce the hardest surface - but risks shock cracking so should be used where the component possesses some 'bulk'.

Thin Oil - Oil is probably the safest method that should be used for a majority of complex components, as the rapid cooling effect is reduced because of the viscosity of the oil. Traditionally whale oil should be used to achieve best results - though in all cases fire will occur at the surface. Oil should be used when a good hardness is desirable but with a reduced risk of cracking - it is difficult to achieve the same hardness using oil as with water based quenching.

We should start by making certain that health and safety procedures are followed as a risk of a burn injury should be considered.

To begin, decide the method of heat treatment that you will use - be it via a gas torch or a furnace, also have to easy reach the quenching solution and a good long pair of tongs (or pliars for smaller components)

• The first step is to pre-heat the component to about 500°C - this is the point before the material glows bright red (it may change colour). This pre-heating stage is important for many reasons because it will reduce stress on very thick wall sections with thin intersections and also allow the component to heat more uniformly during the high temperature range. This temperature should be maintained from between a few seconds for small components to many minutes for larger items until uniform heating is achieved.

• Continue to heat the material to about 860°C - 900°C (1580°F - 1650°F) - or a nice glowing cherry red. Be careful not to heat too much, an indication of too much heat is small 'hot spot' areas appearing on the surface (indicating too much concentrated heat) or surface melting on corners.

Maintain the heat at this point until uniform heating has occurred (if using an acetylene torch) then carefully and quickly plunge component into the quenching liquid being careful not to damage the surface with excessive pressure on the tongs.

• Leave component in quenching liquid until it has cooled sufficiently to handle by hand. If heat treatment has been successful the material should be extremely hard at this point - care should be taken not to drop or shock the component to avoid causing a crack or other damage. Once cool, the engineer should polish the black scale from the surface to reveal the steel colour underneath - this is to aid the next stage of the process, tempering.

Tempering is equally as important as the hardening process its-self, as it is at this stage that determines the overall usability and structure of the steel. Tempering is a process which involves re-heating the hard material up to a certain temperature and maintaining this temperature for some time until the steel has tempered producing a softer and uniform structure (or until the temperature is reached throughout the entire component, including that internally) - this makes the steel softer and more durable to shock loading or wear.

The diagram above shows the surface colour change depending on temperature.

As a general rule, the graph shows the temperature over hardness (Rockwell C) that will be achieved during the tempering process. 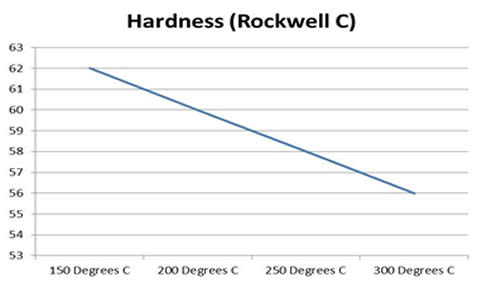 The engineer should be careful to allow enough time for the core of the material to reach the same temperature as that of the outside, therefore it is often necessary to maintain the tempering heat for some time. (calculated on material weight)

After tempering, the component should be left to cool naturally to complete the process. Should the hardness of the part be found not as expected, then the whole process can be repeated as long as it is considered that the risk of component distortion or surface blemish may increase.

Once the component has completed the hardening and tempering process, it may be finished machined in the normal fashion (turned, milled, ground etc) - though in the case of harder finished treatment, the use of a quality grade of carbide or ceramic may be required to aid high tolerance finish machining. Hardened and tempered steels respond particularly well to surface and cylindrical grinding, increasing the ability to obtain a very fine finish which will be durable and long lasting.

Machining of un-tempered steel is not recommended, as in this state - the simple act of gripping the material in machine jaws my cause the component to crack or shatter. In some cases where maximum hardness is required (for specialised processes such as 'D' bits), all machining should be completed before heat treatment - leaving only polishing or grinding to bring the part to size. It is always good practise to temper the steel to 150° for best results where maximum hardness is desirable.

There are many other processes that can be employed to heat treat steels - depending of both the facilities available and also the cost. Common methods include: sand or salt bath where the component is placed in a box and packed tightly in salts which greatly helps heat distribution and reduce distortion. Nitriding: popular for tool hardening, as in this process the component is placed in an atmospheric controlled environment which results in a near perfect surface finish with minimal distortion and consistently controlled hardness. Carburising: the method of increasing a steels surface hardness via the use of either a carburising flame or addition of casenit salts.

Further quenching solutions were widely used in the past, such as goat urine, beer and even blood! Thankfully these methods have since been improved upon.

Want to ask a question?

If you want to place and order then the quickest way is to either telephone or email, currently we don't take orders on-line as we're old fasioned and like to write things down (this way we know if we have physical material stock on our shelves for an enquiry.) We're always available to help with a material selection or advise on an engineered part, please feel free to give us a call as one of our engineers will be happy to help.

We're a small business trading under the name of M-Machine, our registered company name is Craftgrange Limited. We operate from the UK under the registration number of 01476185 and were established in 1980 to supply pressed steel panels, engineered parts and materials to business and general public.

Learn more about who we are »